How This Campus Has Grown!

The archives is fortunate to have several aerial views of the campus in its infancy. This week I have included two images which give excellent perspective of the neighborhood at the time the school was established and reveal several landmarks which have since disappeared.

In this view towards the north (above), the original Gray High School building can be seen on the bottom left bordering the tracks owned by the old Norfolk Southern Railroad (later merged with the Southern Railway Company). The land on which the tracks are located was purchased from the railroad in the mid 1990's to make way for the school's South Main Street entrance.

The former Gray HS gymnasium and locker room building is visible on the right, opposite the high school. Visible, also, is the one and only access road leading to and from the high school linking Waughtown and Chapel streets. The recently completed Sanford and Moore dormitories (named for the two North Carolina governors instrumental in the establishment of the school), are evident in the new construction on the hill directly behind the Theatre/former Gym. They sit atop the old Gray High School football field!

Barely visible in the upper right hand corner of the photo is the former Mack Truck building which was purchased during the tenure of Chancellor Robert Suderburg and renovated to house the school's administration offices.

Adjacent to the Mack Truck building is the Pearce Laundry building, a dry cleaning and diaper laundering service, formerly owned by Myra Gardner Pearce, the older sister of famed actress Ava Gardner, glamorous Hollywood star of the 1940s, 50s and 60s. This building was home to the first students of the School of Filmmaking from 1993 until the Film Village was completed in 1997.

Just left of center in the upper portion of the photograph is perhaps one of the most significant landmarks in the neighborhood. The baseball field, at one time known as Southside Park, was home field to Winston Salem's minor league teams prior to the opening of Ernie Shore field on University Parkway (constructed in 1956 after fire destroyed the old wooden grandstand at Southside). It subsequently provided a home for local black ball clubs at a time when segregation separated white from black on the major and minor league teams. Legend has it that Babe Ruth and Jackie Robinson (who broke the color barrier in baseball in 1947) played on this field where the Film School now sits.

North of the baseball field sits a small area of residential housing purchased by the school in 1979 and razed to make way for the Bailey St. college apartments constructed in 1984. 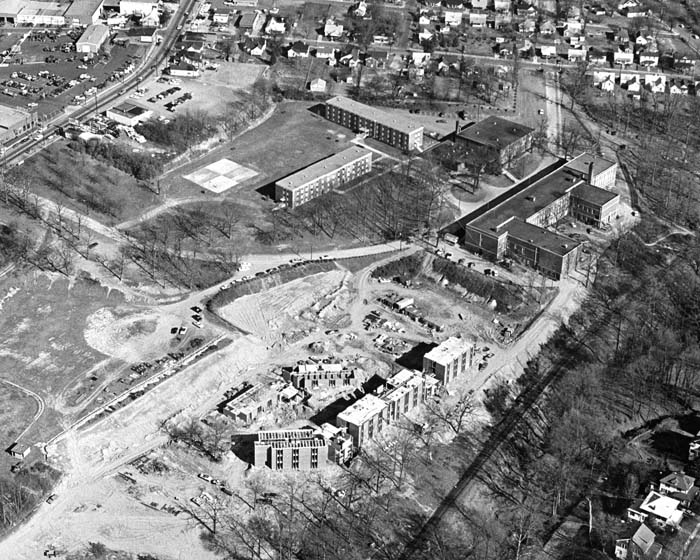 A view towards the south, four years later, indicates a wide swath of clear cutting has occurred as construction is underway on college dormitories and the Commons in 1969.

In the last forty seven plus years, the footprint of the school has expanded north, south, east and west. The current landscape and physical plant are a testament to the difficult work of formulating master plans through seven administrations on which all have left behind their marks of function and form. The campus we know today is a vastly different campus than the one our charter students (and current alumni) explored in 1965. Those of us who have lived through its growing pains over the years of expansion have a better appreciation of its worth than our new arrivals. A campus which began as a temporary shelter in a small, worn out public high school has become, at nearly half a century, a showplace and a warm inviting home for expression of the energy, creativity and artistry of its community.