During the summer of 1972, renovations began on the Drama Theatre (now deMille Theatre) and the auditorium in the main building (now Crawford Hall). A small interim theatre was constructed for Drama productions by D & P students under the direction of Mike Bynum, instructor in stagecraft and technical production. The department chose a design by American architect, Buckminster Fuller, developed while Fuller was teaching and directing the Summer Institute at Black Mountain College in North Carolina. Fuller’s geodesic dome, described by the Winston Salem Journal as “looking like an overgrown igloo,” (8/25/72, p. A1) was composed of materials in the shape of triangles, pentagons, and hexagons which placed their strength upon each other like the keystone in an arch. The overriding principle being the “utilization of gravity rather than the opposition to it” (http://bfi.org/about-bucky/buckys-big-ideas/geodesic-domes). 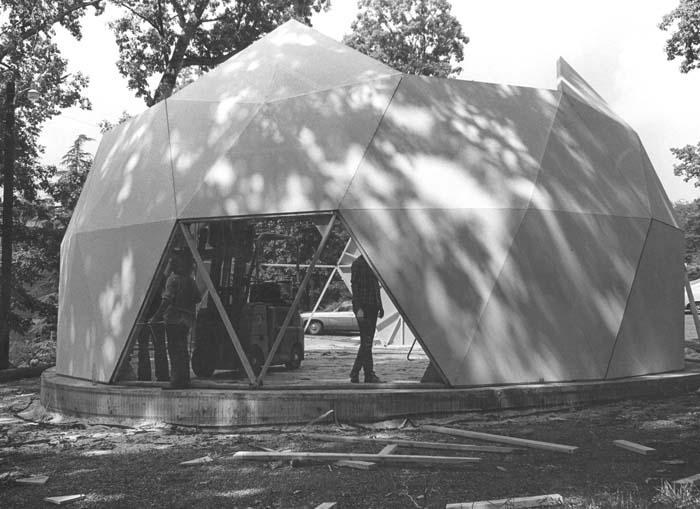 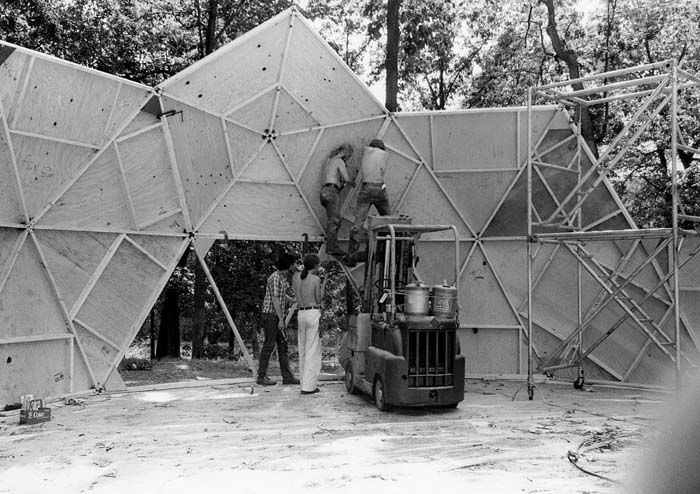 The project was completed in 6-8 weeks on a minimal budget of $10,000. It was an “intimate setting containing 72 seats curved around the stage. Soundproofing was achieved by spraying “Mono Therm insulation” around the walls which gave the building an even cozier feel.” (WSJ, 11/9/72, p. A21) Jules Feiffer’s “Little Murders” opened the Dome Theatre on November 8, 1972 directed by Dr. William Jaeger. In total, 31 productions were held in the Dome Theatre from 1972 to 1976. Exactly when it was taken down is uncertain. The last vestige of it, the round circular cement slab upon which it was built, was removed last spring when the area was cleared for the new campus Police Building. It stood across the parking lot and catty-corner to the SE corner of Chief Cheesebro’s office.

BTW, Mono-Therm insulation contains up to 87% recycled newspaper and a boric acid flame retardant and is now sold as a GreenSpec product!