"During your long and illustrious career, your magnificent performance has brought untold joy to millions of people all over the world. Wherever there have been concerts, record players, radios or television sets, the world has come to revere you as one of the supreme artists of your time." -Tribute to Maestro Andres Segovia by Chancellor Robert Ward on behalf of NCSA, 3 February 1971. 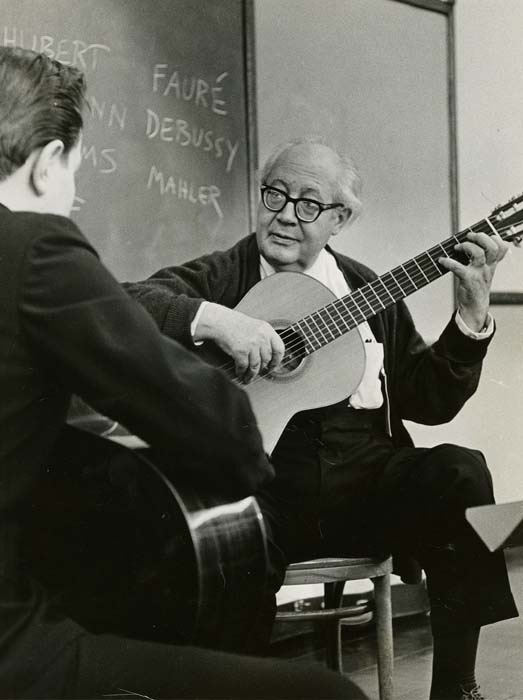 A handwritten note from Maestro Segovia to Chancellor Ward in 1971 illustrates Segovia’s love for the students and our school by confirming his visit in spite of his incessantly busy schedule.

Andres Segovia Torres’ association with the School of the Arts began on 19 March 1965 when Vittorio Giannini announced that Maestro Segovia  had accepted a position as consultant and adviser in classical guitar at the school and that Maestro Segovia had recommended his former student Jesus Silva as resident professor in classical guitar. Giannini went on to declare “Segovia has given a lifetime’s devotion to restore the guitar to its rightful place, and he has become recognized throughout the world as one of the truly unique artists of our time, proving that it is not the instrument that makes the artist, but the artist who makes the instrument. Students studying the classical guitar have Segovia to thank for making their study possible. The school is indeed fortunate to have him.” (Press Release, 19 March 1965)

“Segovia, who is 77, became fascinated by the guitar at age ten, at a time when the guitar was not regarded as a serious instrument.  as his own proficiency increased, he developed a fourfold mission for his own life. First, the maestro wanted to separate the guitar from its consideration as an instrument of folklore-type entertainment. Second, he set about to endow it with repertoire of high quality, which he accomplished both by transcribing music written for other instruments and by encouraging composers to write new works for the guitar. Third, through his world-wide tours, he hoped to make the beauty of the guitar known to the concert going public throughout the world. His final ambition has been realized at the School of the Arts, as well as in about a dozen countries: to influence conservatories, academies and universities to include instruction in guitar in their curriculum, on the same basis as any other serious instrument.” (Press Release, 31 January 1971)

Segovia conducted master classes several times over the years. Chancellor Robert Ward expressed his thanks for one of these visits in the following words, “I am writing now only to express the deep gratitude to you which everyone here at the School of the Arts feels. Jesus’ students are still walking about in something of a dream, for your presence here has been an inspiration to them of inestimable value. Of almost more value to all our students was the opportunity to see and come to know a little bit of an artist and man of your stature.  … So again, many, many thanks for your generosity and consideration.”  (19 March 1971)

On 3 February 1975, the late President William Friday awarded the first Doctorate ever given at the School of the Arts to Andres Segovia. In his letter of invitation, newly installed Chancellor Robert Suderburg wrote, “I look forward to being with you – as a composer I will count it as one of the moments of a lifetime.”