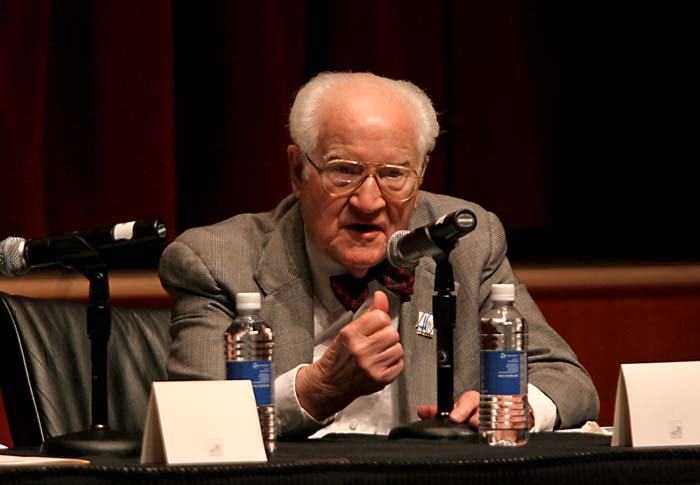 UNCSA’s beloved former Chancellor and friend, Robert Eugene Ward, died peacefully at the age of 95 last week. In an effort to remember the man and the context of his time during the first two years of his tenure (September 1967 – June 1968), this Time Capsule includes Robert Ward’s first President’s Report outlining the state of the school in October 1967, a report of his first Convocation address in the School’s student newspaper, 16 January 1968, and his Commencement address in June 1968.

Robert Ward was challenged to the nth degree when he was asked to take up the reins of a newly formed one-of-a-kind school with barely any infrastructure, job descriptions, policies and procedures and organization. He reports that the business of teaching, learning and performing were all functioning at a lofty level, (no doubt due to the passion of the students and the exceptional faculty which Vittorio Giannini was able to attract). However, the business of administering to of all the details of running a high school and launching a college was a different story. The work was all-encompassing and enormous for one man and his team of a dozen or so officers and staff. Ward wasted no time in organizing committees and drawing from his own experience at Juilliard and Eastman to work on the various aspects of structuring in addition to implementing Giannini’s plan for the summer International Music Program for students at the prestigious Accademia Musicale Chigiana in Siena Italy.

Robert Ward was a brilliant, Pulitzer Prize winning composer with a passion for music and a love of people, yet there were no pretensions about him. He was Head of the School, yet he also wished to be a part of the music faculty and found time to teach composition to the music students. The high regard in which Robert Ward is held can be heard in remarks by two of UNCSA’s esteemed Chancellors in the school’s official press release of 3 April 2013.

Chancellor John Maucieri: “The musical language the world has come to understand as American is due in part to the music and tireless work of Robert Ward,” Mauceri said. “Ward’s operas, performed around the world, continue to tell American tales in an American voice: Robert Ward’s voice.”

Chancellor Alexander Ewing: “Bob Ward was a wise, compassionate, energetic leader, as well as an eminent composer and champion of the arts. We all still look up to him as a founding father and pillar of the school.”

His wise counsel to the students in his speeches to espouse the virtue of humility in their approach to their art and life are an accurate reflection of his own values. I hope these archival documents give you a better sense of the man who was Robert Ward.