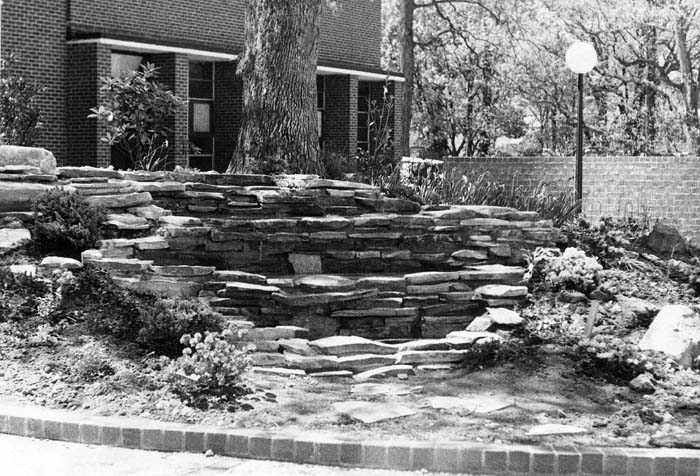 (Piazza Artom outside of Gray Building, circa 1970.
Photograph Collection, University Archives, University of North Carolina School of the Arts.)

In the early years of the school, after the Student Commons was constructed in 1970, the route between it and the Main (Gray) building became the busiest artery on the campus with traffic flowing to and from the Main building of classrooms, offices, studios, and practice rooms and the Student Life building of dining room, mailroom, campus store, basketball court and swimming pool, yes, swimming pool!

The efforts of one very special woman transformed that tiny “courtyard” into an oasis of natural charm and beauty for the fledgling campus.  Bianca designed a garden of daffodils, azaleas, camellias, liriope, blue bells, and hostas with a waterfall as the central focus.  If you look carefully you will also notice the red brick serpentine wall built to mask the service entrance below.  Behind the oak tree, there are glass doors which enter the area of Gray building where practice and faculty rooms are today and where the former dining room of the high school and NCSA was located until the Commons was built.  The lamp post (no longer present) would have illuminated the garden beautifully after dark.  The photo above gives an entirely different perspective of the space as we know it.  How often have you hurried past this lovely spot and not taken a moment to savor its almost forgotten ambience?

On 13 Oct 1971, the trustees held a ceremony to dedicate “Piazza Artom” in honor of the woman “whose foresight and interest and unstinting personal devotion and labor saved this area for artistic and esthetic enjoyment.” ” (Board of Trustees Minutes, 30 Apr 1971)  A small bronze plaque inscribed: “Piazza Artom, designed and planted by Bianca Artom, 1971” was placed beside the waterfall under the majestic oak and remains there today.

Mrs. Camillo (Bianca) Artom, born in 1909 in Naples, Italy, was a founding faculty member (Italian) of the NC School of the Arts.  She came to this country in 1939 with her husband, a world renowned biochemist who accepted a position at Wake Forest University Medical School and assisted in moving the Medical School from Wake Forest to Winston Salem in 1941.  Forced to flee the oppression of Jews in Fascist Italy, the couple quickly made a new life for themselves in this country. “Although they were not U.S. citizens, they were allowed to adopt a son, George, from the Children’s Home after Wake Forest students and teachers signed a petition.” (Obit, WSJ, 6 Feb 1994).   Bianca, who could hardly speak English when she arrived became a teacher and patron of the arts.  She was one of 12 founding members (1963) of Piedmont Craftsmen, Inc., specializing in needlework and embroidery.  She was an avid gardener planting her own and gardens at the School of the Arts and later at Arbor Acres, Inc. where she lived in later years.  She served with distinction on the faculty of the School of the Arts from 1965 to 1976 and subsequently became a faculty member at Wake Forest University, teaching Italian to scores of students.  Four years after her husband’s death, in 1974, the building that formerly housed the American Consulate in Venice was purchased by Wake Forest and named Casa Artom in honor of Bianca’s husband, Dr. Camillo Artom.   Bianca assisted in the renovation and operation of Casa Artom for Wake Forest students abroad for nearly 20 years until her health began to fail. She died on Feb 5, 1994.  Over the years she “helped countless medical, arts, and university students both financially and morally in their quest for an education.”(Obit)  She funded several scholarships through Wake Forest, Bowman Gray School of Medicine and NC School of the Arts.  She was laid to rest in Asti, Italy beside her husband and baby daughter, Gemma.

Retired faculty member, Nancy Goldsmith, shared with me how she (Nancy) “used to take her Italian classes every year on a "gita scolastica" (field trip) to that beautiful azalea garden at what used to be called "Piazza Artom" (n.b. it should still be called that!) and show them that little plaque and explain what it meant.”

Bianca’s own lovely gardens are being cared for by our alum, David Winslow, Class of ’76, Viola,  one of Ms. Artom’s most ardent Italian pupils and the owner of the former home of the Bianca and Camillo Artom at 1538 Overbrook Ave on the edge of the West Highlands neighborhood in Winston Salem.