Who is the “Crawford” in Crawford Hall?

Time passes swiftly and memory fades with each passing generation. As UNCSA approaches its 50th anniversary it is worth bringing back to mind one of our founders who “struggled literally to pull the school up out of the ground” (PP, p.176). R. B. Crawford Jr. for whom Crawford Hall is named was born 112 years ago at the dawn of the 20th century. Born in Winston, he was a member of the “old school” and was celebrated by all in this community in his time. He was known as Winston’s “Great Builder” and, among other accolades, received the first Chamber of Commerce “Community Service” award on 8 December 1969 for his contributions to Winston Salem. 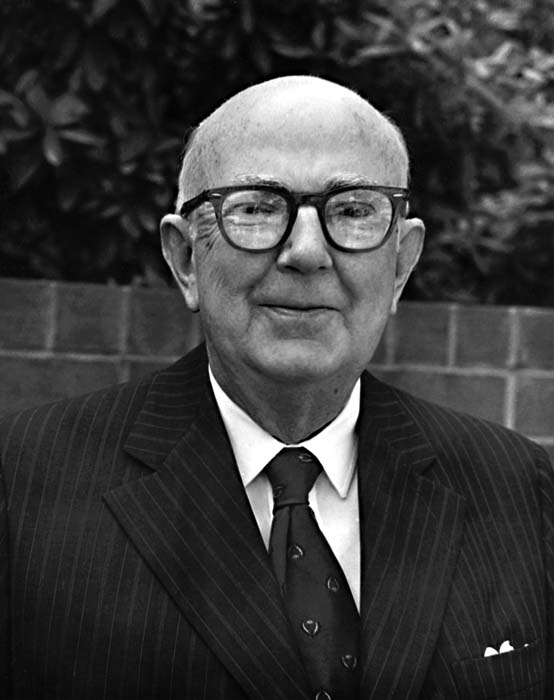 On the eve of his retirement as Board Chairman after an illustrious 43 year career with Hanes Hosiery, Crawford accepted the post of President of the NCSA Foundation (created on 22 October 1964) charged with administering the $1M telethon dollars and soliciting additional private funds. He had also agreed to chair the building committee tasked with building two dormitories and renovating the old Gray High School in time for the arts school’s opening in September 1965.

It is well worth reading A Passionate Preference for a description of the challenges faced by Crawford in the short time allotted him (10 months!) to accomplish his goals. (PP, p. 173) notes that one of R.B.’s first crises in the school’s building project of two dormitories needed to house the school’s first students was the discovery that “the HS football field they had purchased as the site for dorms was a landfill and more money had to be found for pylons or the buildings would have sunk into the ground”.

There is no better article which describes the man, his life and his contributions than the following written for the old Winston-Salem afternoon paper, the Sentinel, on 8 August 1965. Sit back and enjoy this wonderful article so typical of the best of journalism in by-gone years.

The article below was submitted by Velma Jean Cleary, a well-known Winston-Salem society columnist, in her “Weekend Roundup” (10 January 1966) on the occasion of R.B. Crawford’s retirement illustrating another aspect of life fifty years ago, the formal retirement party held in true southern fashion.

In conclusion, an editorial written at the time of R.B.’s death points to his most esteemed legacy this way: “The monuments of brick and mortar that Crawford labored over have contributed to the flourishing of the place he loved. But still they are temporary reminders. The more remarkable and enduring monument is the excellent standard of individual generosity and public service that the life of R.B. set.” (Winston-Salem Journal, 2 August 1984). And this is how we at the School of the Arts should remember the man for whom Crawford Hall is named.